One would not expect a tiny urban garden, surrounded by impermeable fences and walls, to be awash with native mammals. Indeed it seems to be very attractive to domestic cats who are doing their best to kill everything in it!

However, we have had five species so far. House Mice (Mus musculus) are by far the commonest… they seem to emigrate to the garden in summer then use the garden shed as a nursery before trying to get back into the house… unsuccessfully since we converted the loft and expanded our kitchen.

We have seen a Brown Rat (Rattus norvegicus) – thankfully just once when we had not burried some goldfish that died of ‘bloat’. A couple of years back a rather mangey urban Fox (Vulpes vulpe) found a route in and stayed long enough to accept our offerings of cat food mixed with a mange medicine.

That was the tally until this year (2013). Unhappily mammal number four was a Grey Squirrel (Sciurus carolinensis) who has found that its worth crossing two roads from the local park to get to our bird feeders. Much as I dislike these invaders they seem immune to our protestations.

Mammal number five was a surprise. As I was stock still trying to photograph an uncooperative hoverfly something ran beneath me on the pond wall. It came to a stop almost imediately below me and I managed to get a couple of shots before it twigged my presence and shot off for cover. I hope the Wood Mouse (Apodemus sylvaticus) sticks around. 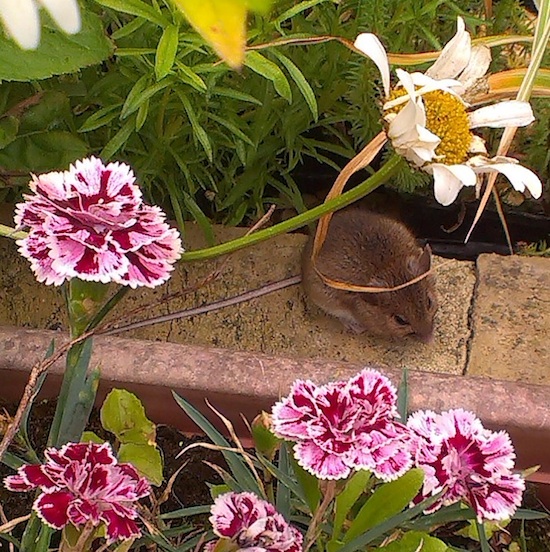