The Common Pill Bug (Armadillidium vulgare) is the most familiar of species. In the days before X-boxes and premature maturation among kids, when sucess was measured in the number of marbles you could accumulate through competative play, pill bugs were a familiar fascination. Where I grew up in Kent we called them ‘pea bugs’ as they were the size and shape of peas when they rolled up defensively. Like the Queen of Hearts in Alice in Wonderland using flamingos and hedgehogs to play croquet, we used to roll them along the ground. When we tired they scuttled away, so our innocent use seemed to cause no harm.

This chap was on the floor of my garden shed… a dumb place to be as, skulking in the darkest crevices we have the ‘False’ Black Widow spider and they feast on woodlice. Here and there one comes across small heaps of their carapaces sucked clean of anything edible! 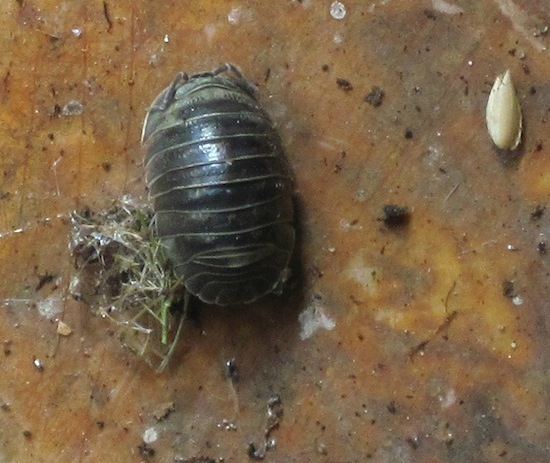