Varied Carpet Beetles (Anthrenus verbasci) fell in love with a plant that self-seeded in my patch. I recognise it as a garden plant which was common in gardens fifty years ago but not seen much nowadays – shame I don’t know its name but it has a very unattractive scent. Despite their name it seems that these beetles are generally sustained by pollen rather than carpet fibres… at least so far as the adults are concerned. The larvae (known as woolley bears) can be a serious problem on carpets, and even worse for taxidermists.

To be honest I didn’t even notice them with my naked eyes. These are at least five times life size and the illustration id part of a photo I was taking of something else – these chaps appeared when I zoomed in! To me they were just black dots that could have been anything and I had dismissed them as some sort of insect dropping! 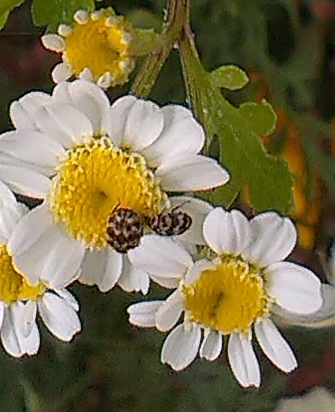